"Applying Compassion in Business Management & Life"
In our daily hectic lives, how do we dispense compassion at work and in personal settings, especially when emotions or situations are spinning out of control? Is it possible to achieve peace amidst today’s hectic pace of life?

Business owners and managers, are you finding it challenging to nurture a team in your care whilst still achieving KPIs?

Discover these answers on our special program led by His Eminence Khedrupchen Rinpoche of Sangchen Ogyen Tsuklag Monastery in Trongsa, on Tour Neykor.

Can compassion and business goals go hand in hand in a professional setting?

How can grace be dispensed in times of tensions and complications?

What do joy and happiness look like in today’s modern society?

What are some timeless values that we can incorporate in our professional and personal lives as we continue to navigate the ambiguity and uncertainties of the future?

His Eminence will be answering these salient questions during your trip.

This Neykor Tour is specially designed for those who want to seek a deeper understanding of the meaning of life and journey inward.

A Journey of Spiritual Immersion in Bhutan

The package is inclusive of :

Learn practical applications of compassion in business through:

Welcome to Bhutan, the Land of the Thunder Dragon. Your tour guide will receive you at the Paro International Airport.

You will take the day to soak in the beautiful atmosphere of Bhutan and you will be meeting His Eminence Khedrupchen Rinpoche for a tour briefing.

Explore the charm of Paro district, the perfect blend of modernity and tradition.

Today, you will take a domestic flight to Bumthang located in Central Bhutan. Bumthang is the most spiritual region of Bhutan. It was where Buddhism was first introduced to the kingdom. There are many sacred sites located in Bumthang.

Upon arrival in Bumthang, you will visit Burning Lake (Mebar Tsho or Membar Tsho). It is a holy site where Bhutan’s greatest terton (treasure finder), Pema Lingpa, discovered several of Guru Rinpoche’s treasures in the 15th century. According to legend, Pema Lingpa had a dream urging him to go to that particular spot in the Tang Chuu river. After standing on the rocks looking into the depths, he discerned there was a temple at the bottom with many doors, one of which was open. He dove in and swam into a large cave where a woman with one eye handed him a treasure chest. As he took it from her, he found himself back on dry land.

He held in his one hand a box made of joint skulls and a small sculpture. And in his other hand was the butter lamp, its flame still burning bright. Hence, Naring Drak was named Mebar Tsho, or Burning Lake.

Rinpoche will lead a visualisation meditation at Burning Lake. After the meditation, there will be 10-15 minutes of short Q&A.

Time and weather permitting, you will also visit the following holy sites:

Kurjey Lhakhang: One of the most sacred monasteries in Bhutan. Built by Guru Rinpoche in 1652, it houses a rock with his body imprint. Legend has it that Guru Rimpoche manifested as a Garuda to defeat the demon Shelging Karpo who had taken the form of a white lion.

After lunch, you will embark on a two-hour drive to Trongsa. You will visit the following sites:

Trongsa Museum - Sits high above the valley at a strategic vantage point overlooking Trongsa Dzong. The Tower of Trongsa tells the stories of the dzong and the valley that it has witnessed over centuries.

Trongsa Dzong - It was laid in the 16th century by Pema Lingpa and flourished during the 17th century under Shabdrung Ngawang Namgyal.

You will learn about applying compassion in business management from Rinpoche.

There should be some free and easy time.

Today you will visit Rinpoche’s Monastery, Ogyen Sangchen Tsuklag Monastery. The drive will be about 45 minutes from the hotel. You will be spending the whole day at the century-old monastery.

The sacred monastery was founded by the great female practitioner Khandro Tashi Khidren of Chhagkhar who was the only consort of Guru Rinpoche from Bhutan. Tashi Khyidren had meditated in many places including Paro Taktshang (Tiger’s Nest), Singye Dzong etc. Among those holy places, Rephel Mindrol Lhakhang (now known as Ogyen Sangchen Tsuklag) was the one where Tashi Khyidren had built as her retreat place. The holy water revealed by Guru Rinpoche and Tashi Khyidren can be seen 15 meters away at the right side of the monastery, and the footprint of the riding horse is found behind the main temple. Later, the monastery became the main seat of Rephel Lama Gyeltsen.

This retreat will enable you to explore the nature of the mind, transform your consciousness and enhance happiness and true joy through simple yet powerful techniques.

Today, you will visit one of the most beautiful regions of Bhutan, Gangtey (aka Phobjikha Valley). The journey is approximately 2 and a half hours.

You will stop for a tea break near Chendebji Chorten to discuss about the Six Perfections’ Motivation (20 - 30 minutes).

Upon arrival in Gangtey, you will pay a visit to Gangtey Goenpa and continue with the Six Perfections’ Session.

Zooming into the Six Perfections’ motivation, learn how you can understand and thus gain power over the emotions that govern your inner joy and happiness. You will learn just how deeply emotions affect your peace (or lack of), how exactly to harness these emotions as a tool for lasting happiness – instead of battling them. This talk will help you see how embracing our emotions gracefully might just be the answer.

After that, you will stroll around the beautiful valley, free and easy.

You will make your way back to Paro from Gangtey.

You will stop by Dochula Pass, a stunning mountain pass with a spectacular view of the Himalayan range.

Following that, you will continue your journey to Thimphu where you can shop and stroll around Thimphu town. (2-3 hours)

After lunch, you will go to Paro.

Kyichu Lhakhang: Also known as Kyerchu Temple or Lho Kyerchu, is the oldest temple in Bhutan. Just like Jambhay Lhakhang in Bumthang, it is one of the 108 temples built by the Tibetan King Songtsen Gampo to subdue and pin down an ogress that was obstructing the spread of Buddhism.

You will practice on ‘Mindfulness’ – which will help you to generate focus and stay present at the moment – regardless of the situation you may find yourself in. You will find that in the long term, this skill will help you connect with people and your environment in a loving way.

Some goals of this workshop:

Dinner at a farm house.

Are you ready? You will be making the hike up to one of the key highlights in Bhutan today! Tiger's Nest aka Taktsang Monastery.

Taktsang Monastery - Often called the Tiger’s Nest, is a prominent Himalayan Buddhist sacred site and temple complex perched on the cliff side of Paro Valley. “Trip to Bhutan is never complete without climbing to Taktsang”, says one tourist. Indeed, it’s true as the journey there fills you with spiritual bliss. For those who are non-spiritual, it is the dramatic, artistically built monument that becomes a hiker’s delight.

Experience the uphill climb as you ascend more than two thousand feet from the valley floor. According to legends, it is believed that Guru Rinpoche flew to this location from Tibet on the back of a Tigress (his consort Yeshey Tshogyal) and meditated in one of the caves. Guru Rinpoche performed meditation and emerged in eight manifestations, and the place became holy, thus gaining the name Tiger's Nest.

At the monastery, Rinpoche will lead a visualisation meditation.

Upon descending from Tiger’s Nest, you will freshen up and have free and easy time.

In the evening, you will enjoy your dinner with a cultural programme.

Today, you will bid fond farewell to this beautiful Himalayan country. We hope by now you would have made some friends and also kept many photos and beautiful memories of Bhutan! And we look forward to seeing you again in this beautiful land of endless enchantments! Tashi Delek! 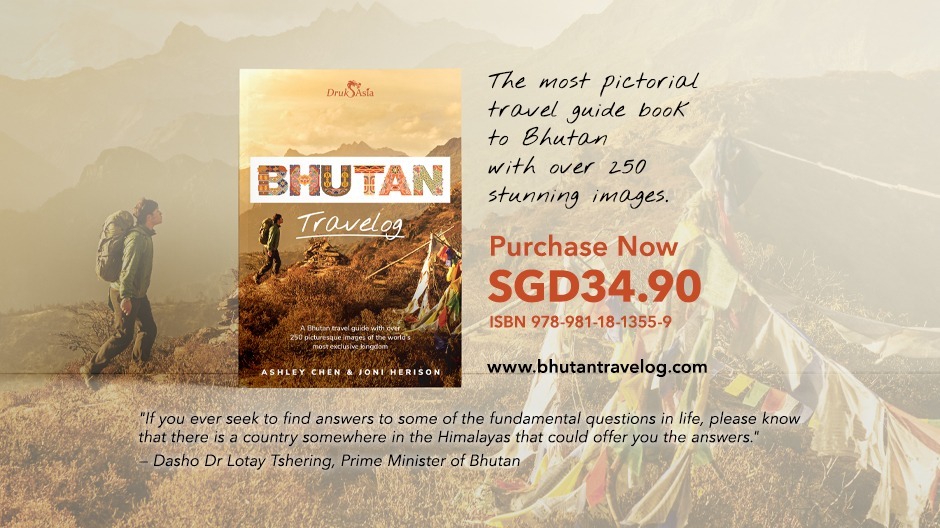 The most pictorial travel guide book to Bhutan. With over 250 stunning images of the most exclusive Kingdom in the world.

Written by two individuals who have a deep affinity for the Kingdom and have travelled to Bhutan for over thirty times collectively.

Want to know more about Bhutan?

Studies tell us that when employees are happy, organisations thrive. Are you and your colleagues happy at work?

Above the usual communication, leadership, delegation, motivation, training - are you perhaps seeking to balance efficacy with empathy? Learning how to listen before you can lead?

Open to everyone including non-Buddhists, seeking to apply mindfulness and compassion in your career and life – eventually learning a skill for life.